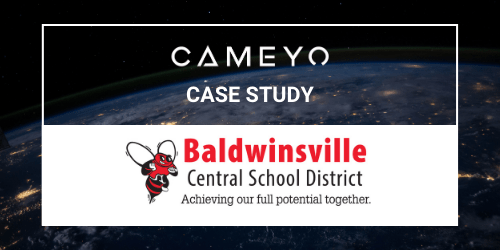 The Baldwinsville Central School District – located outside of Syracuse, NY – is the third-largest suburban public school system in Onondaga County, covering approximately 75 square miles and serving over 5,500 students. Due to the pandemic, Baldwinsville was faced with the challenge of enabling a hybrid distance learning/campus learning model for their students, which would require students to have seamless access to all of the applications they need regardless of where they were located on any given day.

As if that wasn’t challenging enough, things were complicated by the fact that their licenses for the Desktop as a Service (DaaS) product they were using were expiring.

“That actually turned out to be a blessing in disguise,” said John Cerio, Network Administrator at Baldwinsville Central School District. “We had been using VMware Horizon 7, and everything was incredibly difficult to manage already. Scaling that to meet our more widespread needs for distance learning would have been very challenging.”

Baldwinsville already had a 1:1 program, so every student has a Chromebook. But there are still a handful of applications that every student needs to utilize for their coursework – from Adobe’s Creative Suite to Microsoft Office and more – that they were not able to access on Chromebooks.

“We had hoped that VMware’s DaaS solution would solve that for us, but to be honest, it just never worked the way we needed it to,” said Jim Froio, LAN Support Technician at Baldwinsville Central School District. “For our students, the application performance was poor, which creates a frustrating user experience. And from an IT perspective, the complexity is just through the roof. So it wasn’t a good experience for anyone involved.”

“Ultimately, we realized that a virtual desktop approach simply wasn’t a good fit for us. We knew there had to be a simpler, more cost-effective alternative – so it was time to make a switch,” said Cerio.

Cerio and Froio realized they had an opportunity to right-size their approach to desktop virtualization and instead focus on providing a seamless digital workspace that gave their students access to all of the apps they needed, on any device. Which is when they turned to Cameyo.

“Cameyo’s digital workspace solution enables us to give students access to the full desktop version of all the applications they need, on their Chromebooks, securely through the browser,” said Froio. “And Cameyo’s cloud-native approach dramatically simplified our environment both from a deployment and an ongoing management perspective.”

ROI, and Then Some

Baldwinsville notes that saving $50,000 in the first year alone is just the beginning of the ROI they’ll see from Cameyo.

“Another piece of the ROI equation is how Cameyo enables us to invest solely in Chromebooks moving forward, instead of also needing to purchase PCs so that students could also access the needed Windows apps,” said Cerio. “We added 1,400 Chromebooks this year as a result.”

“There’s also the time savings aspect to consider. Cameyo has reduced the amount of time required for ongoing management by at least 50% already compared to VMware,” said Froio.

“Cameyo not only saved us a ton of money compared to VMware, but it is incredibly easy to manage, and is more secure. This works better than anything we’ve ever had, and Cameyo is now going to play a key role in our long-term plans for moving everything to the cloud,” said Cerio.

“It’s also worth noting that Cameyo’s support team is top notch. Every step of the way, with any questions we had, the support team was right there to walk us through it. And they didn’t just try to quickly fix things so that they could close the ticket – they really took the time to make sure we were fully trained and understood how to configure everything ourselves. Our experience has been phenomenal,” said Froio.